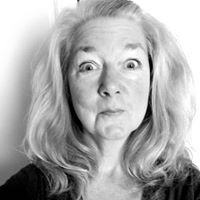 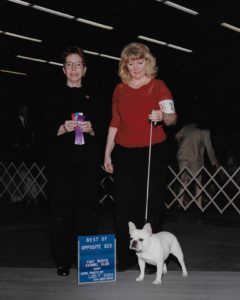 under the kennel prefix, ‘Tea-D’s’, and our dogs have been exhibited and finished not only in the good ole USA, but also Mexico and Canada.

Unfortunately, we failed to anticipate that the success of our show dogs registered with the Tea’D’s prefix would induce other breeders and owners to begin using ‘our prefix’ in the registered names of ‘their dogs’ although their dogs were not bred by Tea-D’s.

Because we could not undo that which was already done, our solution to this dilemma was to apply for a registered kennel name with the American Kennel Club.  That would be the only means to secure our kennel designator (prefix) from breech in the future.  Rather than risk further confusion regarding ‘Tea-D’s’ named dogs that were actually bred by us and those that were not, we decided it was in our best interest to completely change our Kennel Name, and so we did.

Over the years, our involvement in purebred dogs has decidedly been that of the ‘bully’ persuasion, and frankly we are as stubborn and set in our ways as any ‘bully’ ever was, so we came to the conclusion that our newly registered kennel name should reflect both our canine passion for these wonderful ‘bull breeds’ and our own tenacious personalities……….hence “BULLISTIK”.

And speaking of BULLISTIK, we’d like to thank and congratulate Melissa Hagerstrand and her main man, ‘Tank’ aka CH. Bullistik’s Little Sherman for becoming the very first French Bulldog to achieve his AKC Championship title under our AKC registered BULLISTIK prefix.

Since changing our kennel name to Bullistik, we have bred NINE AKC CHAMPIONS and ONE AKC GRAND CHAMPION that carry the prefix, so to date we have bred FIFTY FIVE French Bulldog Champions!

Although Frenchies have been underfoot in this household since January of 1991, we admire all of the ‘bull breeds’ and have always had at least ONE BIG DOG in the family and often TWO bruisers that roamed the house and kept all of us safe and protected.

Let’s face it, FROGS have not one ‘protective bone’ in their bodies, well aside from protecting their food bowl, or their favorite chew toy from another toad.  The majority of them will invite the robbers in, give them the combination to the safe, help them load up the gems, and then make every atempt to hop into the getaway car, just cause they hate to be left out of things, and what the hell…….a RIDE’s A RIDE! 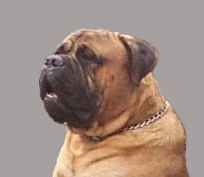 The big brute to the right is Percy, and although we lost our gentle giant to a brain tumor in January 2008 (just a few days before his 6th birthday), we know he will continue to watch over us until his predecessor, Blue Diamond Crusader at Bullistik is old enough, wise enough, and big enough to fill Percy’s shoes.

Our hearts were too broken to think about bringing home another Bullmastiff male, so after careful consideration, we decided that the Dogue De Bordeaux (being French he’d fit right in) would be similar enough in appearance and structure to our wonderful Pursuit of Justice, but not so alike as to be a constant and painful reminder of the spectacular dog and faithful companion that we lost.

We could not have made a more perfect choice regarding the breed or our handsome new baby boy, Crusader.

On arrival, at just 9 weeks old, he was 22 pounds of perfection, and in training for his rightful position as Bullistik guardian. 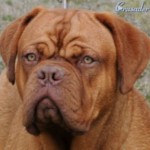 Crusader was everything that Percy was and more.  He would not dream of letting anyone harm his family, and not only was he a fabulous companion to his humans, but he was also gentle as a lamb with his 4 legged French friends; frogs and dogues.

He has sold us completely on the fabulous Dogue De Bordeaux!

Unfortunately, at age 5, Crusader was diagnosed with an aggressive CANCER that invades the blood stream.  There was no stopping the cancer, and no cure.  Another God awful heartbreak for us, BUT, this boy was able to do something that none of our previous large breed PROTECTORS could, he sold us completely and irrevocably on the Dogue De Bordeaux, regardless of the devastation that his illness and eventual death brought us.

Although we were destroyed when we lost him to cancer, the almost 6 years that we spent with Crusader made us believers in the breed as a whole.  Much the same as our foray into the world of French Bulldogs did back in 1990 when we purchased our first frog, Chevalier.  Chevy hooked us on the French Bulldog breed and Crusader was able to convince us that the Dogue De Bordeaux is the perfect fit for us in protection, companionship, and unequaled temperament with their much smaller French buddies.

The current Security Force at Bullistik consists of the ‘Brothers Big’ aka BANG & SHOT, and they take their job seriously.

Nobody is getting to their humans or their small French brethren without going through the Brothers Big!

These two boys are always vigilant, constantly patrolling their fence line, and forever on guard for their family (humans and canine). 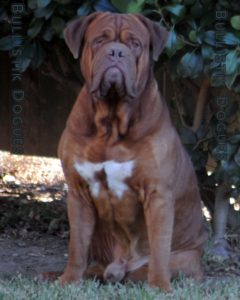 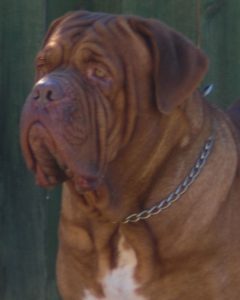